My friends and I are all at that awkward period of our lives. Our offspring are chomping at the bit to make a break for it and begin their adventures as full fledged adults. We of course know better with our mama bear instincts and think they need a little more time to ripen before they operate without a net.

My Sistah and I often discuss how people at work commend us on our sharp minds, how we have excellent communication skills and never forget a thing. Our children however swear we never listen to them. “I told you I had to have that book for my summer reading list a thousand times!!!!!” they shriek. First of all, telling me the day before school starts doesn’t make it count as a thousand and two, back away from the Mama until you can rein in those hormones honey child. I only have Sheldon where My Sistah has a 13 year old girl and a 16 year old boy. Just about the time the Boy learns to be a bit more civil the Girl will be in the throngs of sweaty boys and stuck up girls.

School is back in session and one barn girlfriend is suffering from big time empty nest syndrome. Her baby girl is torturing her with the death of a thousand paper cuts, not taking her calls unless the baby is overwrought or out of money. The daughter’s Facebook pictures show her having entirely too much fun without mommy. I’ve been making sympathetic clucking noises reminding her that Sheldon still tries to escape like a crafty wild pony but sometimes will stick around for a few carrots and sugar cubes. Now days, Sheldon won’t reject my advice immediately, usually waiting at least 10 minutes. Sometimes she even, Gasp!! Says I was right. Not often but from time to time. Reintroduce yourself to those friends you’ve not been having enough time for and maybe even make a few new ones of your own. Here’s an appetizer recipe to have with your wine while toasting each other about what underappreciated parents you are.

Cut and deseed peppers into 1” strips. Mix cheese and basil in separate bowl. Place peppers inside of pepper down on medium grill for approximately 3-4 minutes. Flip over and smear cheese mixture on inside and continue to grill until cheese is melted. If you’re uncoordinated like me, take the peppers off, stuff them and put them back on.

So what’s the difference between teenage boys and girls? The parallel universe of taking out the trash.

Girl, take out the trash. Screw you, I hate you, you make me do everything!!!

End result, you're still taking out the trash yourself.

I know it’s hard, about the time the kiddies need you to stop holding their hands and are people you’d actually like to hang out with, they “de-friend” you. Just know that LOVE is a four letter word and the older they get, the smarter you will seem to them. If only we could lock them in their room until they see it our way, since after all, Mother knows Best.
Posted by Mrs. Tuna at 11:52 AM No comments: 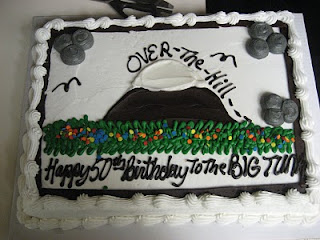 Hard to believe but my guy has hit the half century mark. Eeeeekkkkkk!!!! I’m sure all of you just view me as his much, much younger trophy wife. I was a child bride, at least that’s what I want all of you to think. So what attracted me to my future mate?

Was it that he was taller than me? Was a guy with John Denver good looks? Opened doors for little old ladies? No the sexiest thing about him was that he was the handiest guy I’d ever met. A huge contrast from my own dear daddy who had an eclectic way of home repair. Prime example, Dad painted one side of our enormous house every summer so he wasn’t overwhelmed by a single giant job. He did his best work on the summers he got to paint the “short” ends of the house. Once he used outdoor house stucco to patch a plaster crack on an indoor staircase, when it hardened like a rock, he carried the theme through the whole alcove. I could go on, and on, and on, but this is about the big guy. I’m sure Dad will continue to be featured in upcoming blogs.

I lived in a tiny basement apartment in a rural house in NJ and one of his buddies was dating a girl named Crazy Mary who rented a room in the upstairs part of the house. Since the landlord had little kiddies, he had a firm No Evil Boys allowed in the main house, so Crazy Mary entertained her friends in my windowless apartment. It was truly so dark if I woke up I could never tell if it was 3 o’clock in the morning or afternoon. He tagged along one day, saw my picture in the apartment and just knew he had to meet me. They schemed to arrange a coincidental blind date at the local watering hole, the Rock Bottom Inn. Now that I’ve typed this out he sounds a little more like a stalker, but in a good way.

He grew up in a meat and potatoes Polish family. But he did bring to the marriage a fabulous soup recipe.

Put meat and bouillon cubes in a large pot and cover with water approximately 2 inches higher than the meat. Cook over a medium low heat for 1 hour stirring often. Add tomatoes and tomato sauce and continue to cook for another hour. Add potatoes and cook for another half hour or until potatoes are tender. Serve soup over cooked rice, if you put rice in the soup pot it gets too soggy. Add sour cream to taste. Tomato Rice Soup is the Polish cure for the common cold which makes sense since it’s loaded with vitamin C. When you get a scratchy throat coming on, whip up a batch and heal the whole family.


The thing that sealed the deal? I got a flat tire, he walked a mile in the snow, yes of course up hill. When he popped the trunk and the spare with flat too, he gave a little smile and said no problem. I’d literally known him two weeks and thought, that’s the man I’m going to marry. I’m going to be the future Mrs. Tuna. And so I am, hooray for me!
Posted by Mrs. Tuna at 8:09 PM 1 comment:

Welcome to the Cool Girls Table

Hard as it is to believe I wasn’t always the outgoing over the top chick I am today. High school was a painful wall flower experience. My graduating class was only about 100 kiddies for which I weighed 105 pounds and was 8 feet taller then they were. Awkward doesn’t begin to cover it. I was never one of the cool girls, fortunately we lived close to school so I wasn’t subjected to the embarrassment of sitting alone at lunch with my peanut butter and mayo sandwich. Even my Sista, owner of 50 Izod shirts wouldn’t be caught dead with me wandering the halls.

But there were Mean Girls, the ones who would focus on you at opportune times, drawing attention to some small aspect of you that was already magnified in your own mind. Like the gigantic pimple, right in the middle of your forehead. “Hey, jolly green giant that is the biggest blotch I’ve ever seen. Muffy, did you see the ostrich’s zit?” I did get some minor satisfaction in highlighting them in my creative writing classes under secret names. But now I’ve got my big girl panties on, bring it on.

While not the victim, I witnessed a Mean Girl incident at the slave market this week. Challenges in this current economic market often lead to a realigning of duties, or the moon and the stars in extreme cases. Benito Mussolini has recently overthrown the Administrative Pool and leapt to the top of the heap. Why is it once you get appointed as the head cheerleader your bitchy gene breaks out in full force? The girls on the bottom of the pyramid are about to revolt and leave her without a spotter. What can I do to brighten your day? Feature your woes in a blog? Pick your favorite food and I’ll cough up a recipe to make you feel better. Pig, the other white meat.

This is a multi stop project that actually goes really quick on the grill. The first step is to brine the pork loins to make them really juicy and tender. Second you brush on the glaze prior to and while grilling. Last you prepare the sauce to put in a gravy boat or if you’re like me, just eat by the spoonful in the kitchen and hope there is some left for the guest.

Run brined tenderloins all over with the glaze. Heat gas grill to high for 10 to 15 minutes, reduce heat to medium. Place pork on grill rotating every minutes for approximately 20-25 minutes or until the instant read thermometer reads 145 degrees. Slice and serve with sauce and mashed potatoes.

Now that I’m all grown up, I’m better at negotiating those waters. I will now share with you the words I always use in the politically correct environment. My mom shared this story with me.

Mary: “My Harry bought me these fine diamond rings”

Mary: “My Harry took me on a Caribbean cruise”

Mary: “My Harry bought me this fur jacket, what does your George do for you?”

Susanna: “My George taught me to say imagine that rather then F*** you. “

Welcome to the cool girls table.
Posted by Mrs. Tuna at 5:52 PM 1 comment: