Lovely Sheldon sent me a photo someone took of her playing cello at their recent wedding causing me to wax nostalgic on her affair with her instrument. When she was in 4th grade, the junior high music program gave a hard pressed pitch to the little budding musicians for a bigger cello section. Surely, she’d want to play the sweet, portable violin? Or perhaps viola? But no, she dug her heels in because she wanted to be unique, like I should have seen that coming. This is the same girl who took French rather than handy Spanish living in a state that borders Mexico. 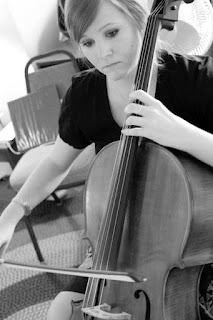 Entering the world where the leader waves a stick to keep the little ruffians in line was certainly a learning curve. Who knew that instruments came in sizes, half, three quarter and full? Or that they have to compete to be first chair? Or those private lessons are the norm? The most embarrassing part was that as unskilled classical music parents we were always clapping at the wrong place. If you’re new to the world, just because the music stops doesn’t mean they're done, it’s the end of a mooooooovement.

I had to upgrade to a pickup truck with a full size crew cab for Pete’s sake. Heaven forbid our new expensive baby rode in the bed unsecured by a seat beat. The plus of the bigger vehicle is it could also fit her stinking golf clubs. We were never so happy as when she got her own freaking car to cram her stuff in so we could actually put our own junk in the backseat. The first 500 concerts were painful squeaky affairs, but by the time they creep along to junior high you begin to almost enjoy it. I have to say she stuck with it and in her sophomore year began playing in the elite high school chamber orchestra. 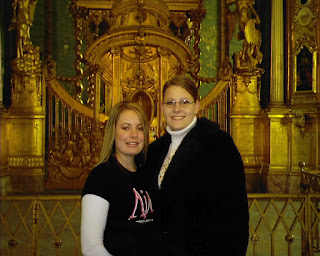 Her talents did score her a trip to Russia to participate in a Music Festival in Saint Petersburg. As usual, I was focused on all the wrong stuff. The cello needed its own passport, too many snuck out of the country and we didn’t want Sheldon to be arrested by stealing a national treasure. The week before she went, eleventy zillion people froze to death in Moscow from the worst cold streak on record, but she refused to pack long underwear, it would involve too many panty lines under her concert skirt. And finally, St. Petersburg has some weird bacteria in the water, Europe’s answer to Montezuma’s revenge. The kids ended up fighting like Survivor contestants over fresh bananas. After having eaten smoked and freeze dried food, she begged us to make her favorite meal on her first night back.

Combine flour, salt and pepper in a bowl. Dredge meat in flour mixture. Heat oil in large skillet, brown meat on all sides. Remove with slotted spoon to saucepan. Add consommé to sauce pan and cook for 20 minutes over medium heat covered. Add sour cream and cook until heated throughout. Do not boil. Serve over hot egg noodles.

I could end this blog by attaching an audio clip as the proud parent, instead, I will default to my usual mode and make fun of my little flower. Attached is a video of a little walk through the Russian snow, something we don’t get in sunny Arizona,  where Sheldon biffs out. Cause I’m sensitive like that.  Happy week Team Tuna!

Updated by request, actual music from when they were in Russia. Bear in mind this performance was by about twenty high school kids, 15 to 17 years old....

One……..more……..week. One more fricking week Team Tuna before the semester is over with those whiny ass little twerps at ASU. Man up for God’s sake. Write your portion of the mandatory group project and I will not have to pull the pants that hang off your ass over your head in an uncomfortable way.  The anti-joy of an Urban Planning degree is that it’s all about building consensus. My engineering brain can only put up with so much listening to your fancy ass ideas before I just take over and spend the rest of the time convincing you to do it my way. The right way, we all know it, just accept. 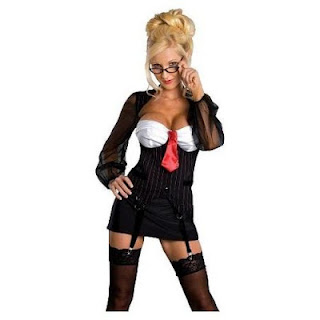 But on the work front, Itty Bitty Consulting has turned me into the Hot Chick. So desirable and enticing with my mad technical skills. All the engineering firms want to date me.  The Endlessly Interviewing client seems to be turning into green-eyed boyfriends. I’ve been captive at their office for the last two months in the perpetual job interview. Where are you going, you’re our little prisoner, keeping me so busy I have no time to follow up on marketing leads or search for new clients.  The added bonus however is they also keep my lover Mr. Refrigerator and I separated and I’ve lost almost ten pounds over the last 8 weeks.

Last week I went to the major transportation conference in Tucson to do meet and greets. The goal was to recruit new members for one of the network organizations, pump up our numbers and take over the world via nerd power. Endlessly Interviewing Company got to see me in full networking action, promising me a full time job if I would just stop passing out my business cards within three hours of my arrival. Especially after I told them I had a phone interview scheduled for later that afternoon with a competitor for which I used my 1-900 voice and scored a face to face interview this week. This of course has not translated into a written offer,  just whispering sweet job promises in my ear as that is their MO.

Free registration, free food and more importantly free booze, which I was drinking on an empty stomach since I was too busy being a little social butterfly to wolf anything down. It was tough to keep my alter ego Mrs. Tuna in check. Best course of action was to go to bed at 8 PM to avoid table dancing and retelling previously posted blog stories including how maxi pads found in the glove box are great for absorbing free coffee.   In keeping with my Hot Chick persona this week’s fare will be nice and spicy.

Brown chicken in olive oil, remove and place in large pot. Add remaining ingredients including juice from hot peppers. Add 2 cups of water and cook over medium heat for approximately 1 ½ hours or until chicken is completely cooked. WARNING-WARNING-WARNING.  This is very spicy, be prepared, it only gets hotter the next day.

So things they are a changing in the hood, thinking I’m going to score a real grown up job in the near future or even continue working from home in my pajamas. And……I am going to be turning 50. Look, I hardly flinched when I typed that.  I am no longer the trophy wife.

But even bigger, Sheldon got engaged 2 weeks ago to a British guy whose accent makes me feel like I’ve dropped 15 IQ points overnight. Nice chap, see, I’ve got the Queen’s English down already, bring on the crumpets. I’m sure wedding preparations will bring lots of blog fodder, hopefully he won’t actually read about it here. So now that we are getting a bit of a breather, I’ll be back at the weekly post grind. Been missing you Team Tuna!!! XOXOXOXO