I have been distracted from posting about the triumphant Tuna graduation by last minute Christmas shopping.  Fighting my way through mall crowds and supermarkets doesn’t make me super sparkly. As you may recall, the tradition of the Stocking Box involves an overflowing of holiday cheer filled with doodads from socks to booze.  Mrs. Tuna has consistently bought a little slinky something, something for the Big Tuna’s box since he is always on Santa’s good list.  Normally I would order something online, but with gifts arriving daily for Sheldon and the Brit’s wedding I was afraid it might be opened by young love by mistake. Awkward. 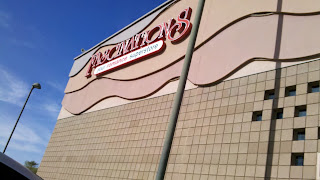 I opted to make a stealth trip to the local smut store. It has a reputation for not making you feel like you need to wrap yourself in saran wrap to avoid creepy cooties.  At the driveway entrance stood a sad, middle aged, Santa hatted,  female employee holding a “Got Naughty” sign, adorned with garland.  My shiny new sensible car did not look out of place with the mini vans and four door sedans with baby seats.  The ding dong announced my entrance and eager young assistants bustled over with cheery offers of help.  I mumbled a bumbling “no thanks”, avoided eye contact, sidled over to the sale rack.

As I stood with my purchase clutched in my hands, I already felt reluctant to use my debit card since it would leave a paper trail. The clerk asked if I wanted to join their frequent shoppers club, it was FREE! Stopitstopitstopit.   Fortunately, they packed me up in a black bag to hide my booty and I skulked out the door, slithered into my car and drove away.  So here’s a little gift to you my band of followers.   A Merry Christmas Team Tuna, happiness and love to all.

Today marks the end of school for Sheldon and I. Please ignore how crooked my dumb stole is! Post for stage spotters and crazy hats to follow. 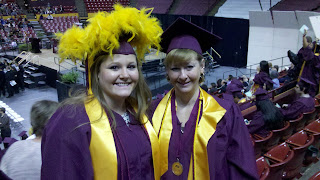 So there Mrs. Tuna was, whipping along the freeway in the super-fast lane, when she heard the little “poink”.  A seemingly innocent little sound spelled the end of my fateful steed.  As power faded away, I used my Nascar instincts to bolt to slow lane, frantically dialing the Big Tuna of my demise. Literally, choked, curled into the fetal position, and died in less than a mile at the bottom of the off ramp in under 2 minutes. 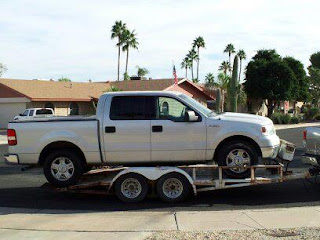 My truck, with 166, 567 miles, had given up the ghost.  Apparently, when your oil pump craps out at 75 MPH it causes your engine to seize in an irreparable way within seconds. With all the expenses of the ASU, Sheldon’s wedding and the Big Tuna’s new business launch we were hoping old Bossy would limp along until spring.  It was a spite death; we’d put brand new tires, rotors, brake pads, and spark plugs in only the week before.  She could sense her days were numbered until she went to the big trade in lot in the sky.  I would have been even more pissed if I’d actually run it through the stupid car wash over the weekend.

My man drove the 20 miles, tow rope and in hand and pulled me to the nearest parking lot.  We jumped in his man mobile and dropped my pretty little ass off at Endless Engineering. She looked so sad and abandoned as we drove away.  I was only 45 minutes late and still beat Boss 1 and Boss 2 into the hood by 7:20 AM.  Its days like this that make you want to inhale an entire desert, so let’s shall we?

Mix milk, coco and butter and cook until fluffy. Pour into mixing bowl and beast in sugar, then adding vanilla and nuts. Frost immediately.

I.hate.car.shopping.  Even more than my mammogram, which is infinitely more painful when you belong to the itty titty club. I will pause to give you a moment to reflect on the enjoyment of squashed boobs over the horror being held hostage by the lounge lizards of car sales.  The first dealership introduced me to Hayseed Hank. He spent the entire time talking to me with a toothpick in his mouth. When the Big Tuna arrived on scene, he completely ignored anything I had to say and began “man to man” bromance bullshit.

If one more of them had said, “my, what a firm handshake you have little lady” I would have beat them with my stiletto.  While Sheldon and I test drove options,  she got on her smarty pants phone, price compared and found the identical model for $750 less.   Bam, done.

In the twilight hours of the delivery, Wyatt, the 12 year technology geek from Ford patiently showed me all the hands free gadgets.  He called me madam. Punk, just show me how to turn on the headlights so I don’t have to punch you. I am almost able to rationalize the cost since I cut my gas bill in half in my new little tiny Ford Focus. All I can think now when I hear the tick tock tick tock of the blinker is car loan car loan car loan.  Ah well, just remember in the future, the lady in the grey economy car with her blinker on trying to get in your lane may be me, just give me a break. It’s been a rough week. Good week Team Tuna.
Posted by Mrs. Tuna at 7:46 AM 17 comments: